Waterways Movement of Cement in India

India is gifted with an extensive network of inland and coastal waterways. Inland waterways span a total navigable length of 20,236 km, which consists of 17,980 km of river waterways and 2,256 km of canal waterways. In addition, a long coastline of over 7,500 km spread across 9 States and 2 Union Territories offers significant opportunities for moving cargo on waterways.1

Waterways offer a number of logistical and environmental benefits compared to road and rail. A single waterways vessel can carry 2,000 tonnes of cargo, which is almost equivalent to one rake of 40 wagons and 125 trucks of 16 tonnes each. Inland waterways movement is comparatively economical costing INR 1.06 per tonne per km (ptpk) compared to INR 1.41 ptpk and INR 2.28 ptpk for rail and road movement respectively. In addition, waterways offer a number of environmental benefits as detailed in table.2

Although waterways movement offers a number of advantages, it still needs to pick up pace in India. Inland waterways currently have a share of 2% in the total cargo moved in the Country compared to a global share of 8 to 15%. Waterways including coastal shipping carries less than 10% of the total cargo moved in India.3 This can be attributed to the challenges around port connectivity and port infrastructure as detailed in table. There is a significant potential for waterways movement in India to take off should the challenges be adequately resolved.

At a recent interaction with CMA, Mr Jayant Singh, Vice Chairman, Inland Waterways Authority of India (IWAI), highlighted that at present about 83 million tonnes per annum of total cargo was being moved on the 25 navigable waterways across India. IWAI was working towards creating the entire ecosystem for waterways movement in the Country, which is expected to be developed over the next 3 to 5 years. The depth of the Indian rivers is low, which often limits the carrying capacity of vessels and draft availability particularly becomes challenging during the lean season from February till the arrival of monsoons. IWAI is proactively working on dredging 4 to 5 stretches to make Indian rivers navigable across the year. IWAI is also constructing 12 new RoRo terminals and jetties to facilitate seamless transportation on waterways.

As India progresses in line with the United Nations Sustainable Development Goals, the focus should increasingly shift towards exploring waterways as a major mode for moving cargo. The Government thinking is suggestive of progress in this direction. The Sagarmala national initiative launched to unlock the potential of India’s coastline and waterways is based on four pillars, namely port led development including port modernisation, port connectivity, port led industrialisation and coastal community development. Sagarmala aims to double the share of waterways movement from its current 6% to 12% by 2025.4

The Maritime India Vision 2030 document developed by the Ministry of Ports, Shipping and Waterways, lays down a blueprint for accelerating the growth of maritime sector in India. It aims to increase the cargo on inland waterways from 83.6 million tonnes in financial year 2020-21 to 140 million tonnes by 2030.5 The Cement Industry looks to partner this growth. Cement can be moved from cement producing states such as Andhra Pradesh, Karnataka, Maharashtra and Tamil Nadu using coastal and inland waterways. In addition, raw materials such as limestone can be moved from limestone rich states such as Andhra Pradesh, Karnataka, Tamil Nadu and Gujarat to other cement producing states.6 This growth can be accelerated given relevant clarity on location and availability of service stations, carrying capacity, logistics cost, long term concession agreements etc, is made available.

India is endowed with a long coastline of over 7,500 km and navigable inland waterways length of over 25,000 km. There are, however, impeding challenges majorly around port infrastructure and port connectivity, which need to be addressed to explore the full potential of waterways. In order to accelerate growth while keeping energy efficiency and environmental conservation in mind, it is important that waterways is progressively adopted as a major mode for moving cargo across the Country. 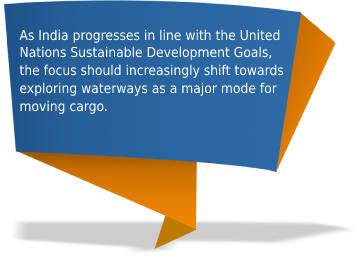