The present day forms of cement and concrete are a result of a fascinating history spanning more than 5000 years from the time of Egyptian pyramids to the ultra-modern architecture of our times. Prehistoric evidence suggest an abundance of limestone in the Nile valley but lack of fuel to burn it at a suitable temperature (850ºC – 1000ºC) and fit for purpose. They used calcined gypsum (CaSO 4 ) as a binding agent processed at low temperatures (~170ºC) building adequate strength but low resistance against water. Perhaps arid climatic conditions found this as a feasible formulation. Some literature also suggests Egyptian prowess with low heatcement making use of catalysts to form a geopolymeric limestone concrete for the great pyramid at Giza. 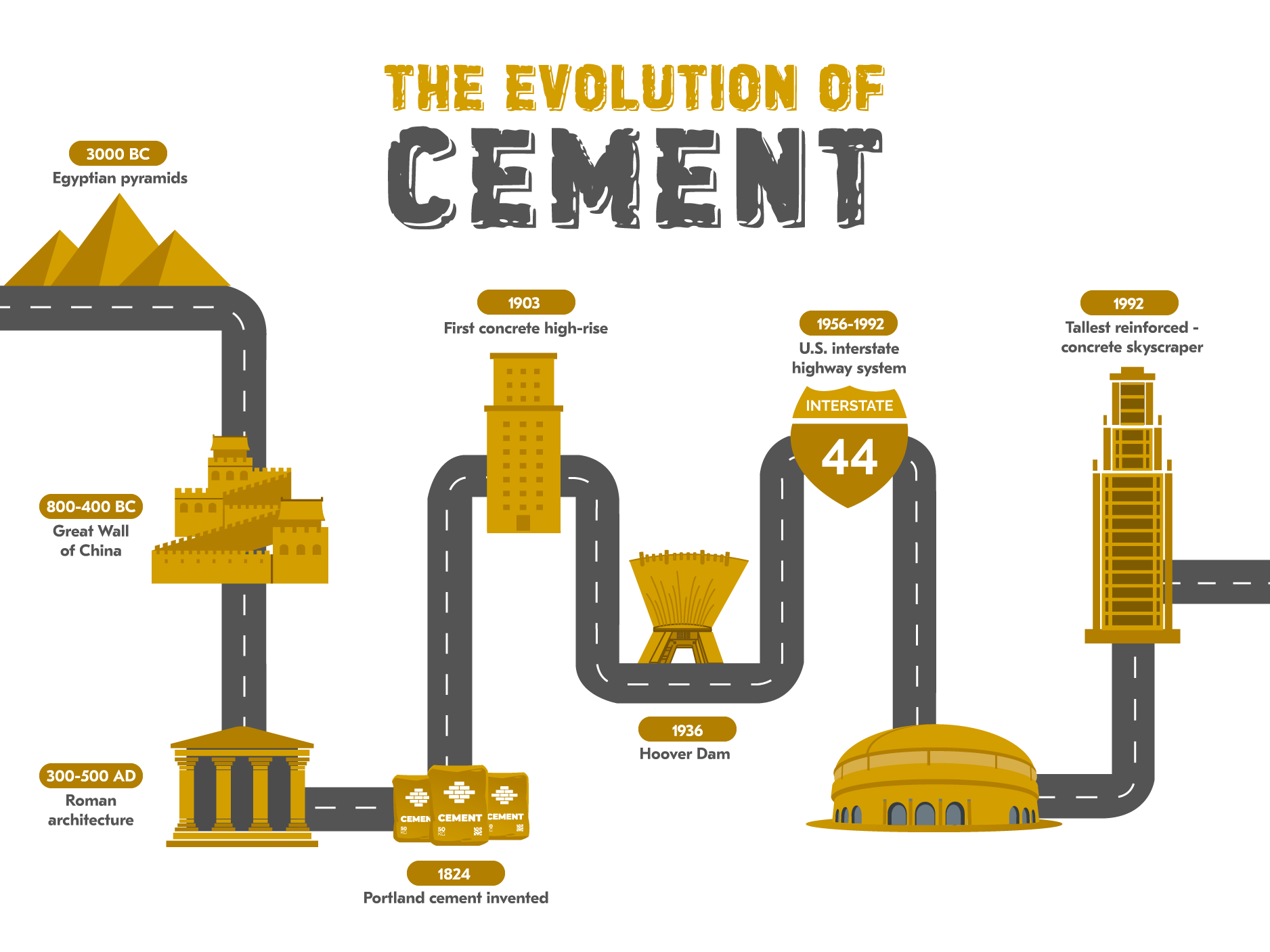 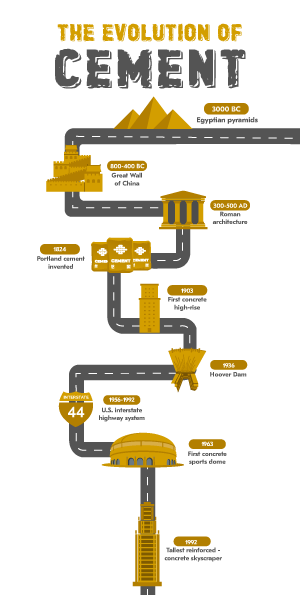 Moving on from the Egyptian era to the history of the classical world, the Greeks were found making the first use of natural Pozzolan (volcanic ash) with lime mortars to enhance durability and water resistance. Later, the Romans mastered the art of using crushed Pozzolana as a binding agent along with lime. The name itself comes after the village of Pozzuoli near Vesuvius from where the ash was obtained. The final product strikingly resembles modern day cement and is somewhat even better with its resistance against saltwater! The Romans exemplified a great example of their workmanship with superior structures such as theColloseum, Basilica of Constantine and the Pantheon. The legacy of Roman expertise can be understood from the fact that Pantheon still holds the record for the world’s largest unreinforced concrete dome 2 ; built in the second century A.D., still undefeated by weathering and earthquakes!

After the Roman legacy, the Renaissance and Industrial revolution advanced the development of cementtechnology, especially after its need arose for building lighthouses on exposed rocks to prevent shipping losses. John Smeaton, after several failed experiments, succeeded with a water resistant mix of lime, clay and crushed slag (from iron-making).

Joseph Aspdin brought further improvements and registered the first patent in his name on a hydraulic cement – popularly known as Portland Cement- due to its resemblance to the widely used building material, Portland stone. He developed a calcination process of firing fine clays and limestone together. This is considered a breakthrough in the modern history of cement making technology. Portland cement, as it is known today, is recognised for its carefully proportioned chemical combination of calcium, silicon, iron and aluminium.

Since the invention and standardisation of Portland Cement and various other formulations, major attention has been given to lowering down the energy intensity of the process through technology innovation and making use of alternative energy sources and raw materials. As compared to the cement process of the 1950s, the average kiln capacity has increased by almost 12 times in the present times as it can go as high as 12000 tonnes per day. In the same duration, heat consumption (KwH/tonnes of clinker) has improved from an average of 1450 to somewhere between 650-750 for the best of industrial units. Similarly, drastic improvements in power consumption can illustrate the technological advancements in the modern era.

India entered cement making process during 1914 with the establishment of the Indian Cement Company Limited in Porbandar, Gujarat. Subsequently, many more industrial units commenced production although they didn’t anticipate stiff competition with cheaper imports of cement and started facing an existential crisis. Today, India stands second to China in terms of Cement production capacity. Over the past decade, the cement industry in India has grown with a phenomenal track record placing country as the net exporter to the world.