Heidelberg Cement India Limited (HCIL) entered India in 2006 through acquisition of erstwhile Mysore Cement, Cochin Cement and a Joint Venture with Indorama Cement. In 2006, HCIL had an installed cement production capacity of less than 3 million tonnes per annum. Through restructuring, expansion and acquisition, HCIL now has an installed capacity of about 6.26 million tonnes per annum. HCIL has an integrated unit at Damoh in Madhya Pradesh, and griding units at Jhansi in Uttar Pradesh and Ammasandra in Karnataka.1

A unique feature of HCIL’s Damoh unit is the 21 km long Overland Belt Conveyor (OLBC) which connects the Patharia limestone mines with the integrated unit. The OLBC is the longest in India with a total of 4 flight of conveyors, a belt width of 1,000 mm moving at an average speed of 4 metres/second. The OLBC has a capacity of supplying 1,000 tonnes per hour of product.2

The need for a smarter solution

Capacity expansion at the Damoh unit was announced in 2009. After expansion at the unit, the limestone requirement at the plant increased to 15,000 tonnes per day. A unique problem faced at the plant was that the Patharia limestone mines, which were to supply limestone to the plant, were located at a distance of 21 km from the unit. This necessitated an efficient, sustainable, environment friendly and safe way of transporting the limestone from the mines to the plant.3

The problem of transporting limestone from the Patharia limestone mine to the plant was solved using a 21 km OLBC. The conveyor system was commissioned in February 2013 and crosses across several villages, roads and the Sonar river spanning a width of 120 metres at the cross over. The OLBC has a total of 4 flight of conveyors, a belt width of 1,000 mm moving at an average speed of 4 metres/second with a carrying capacity of 1,000 tonnes per hour of product.4

The OLBC is erected on 890 Reinforced Cement Concrete (RCC) columns, 61 trestles, 903 girders and 35 vertical bends. The conveyor belt requires 3,300 tonnes of mechanical and electrical equipment. The conveyor belt is maintained on a regular basis and is shut down for upgradation every 7-8 years. 5

Cement Manufacturers are increasingly recognising the need to engage in efficient movement of raw materials. One such solution for efficient raw limestone movement from the mines to the integrated unit was solved using OLBC by Heidelberg Cement unit at Damoh, Madhya Pradesh. The 21 km long OLBC leads to conservation of resources and also promotes environmental conservation besides increasing efficiency and safety in raw material movement.6 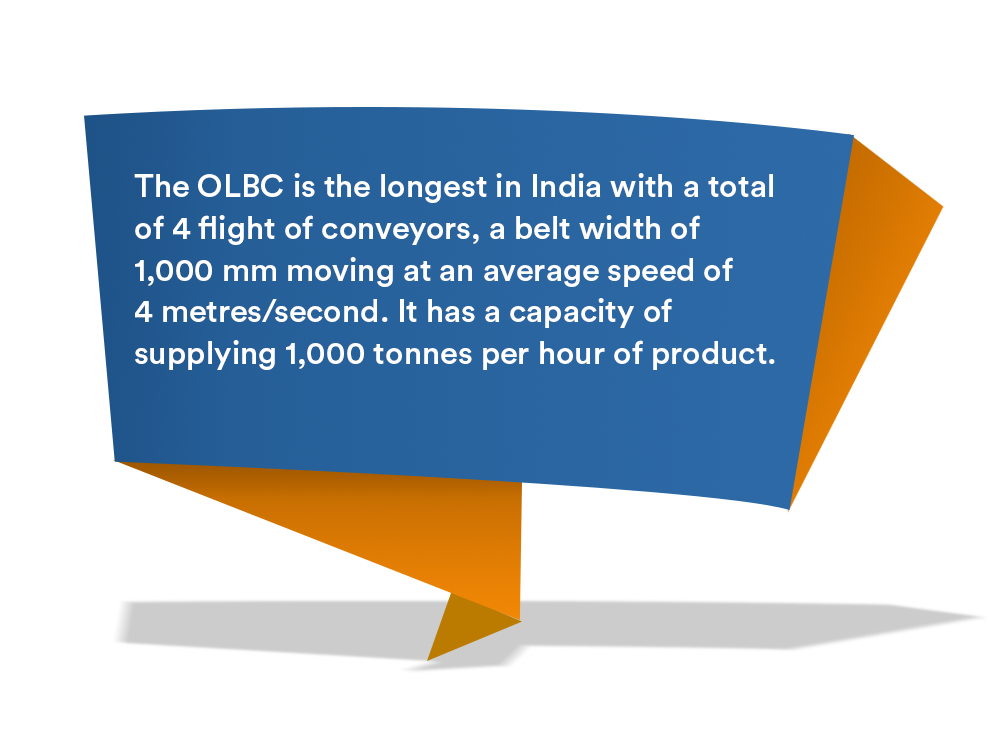