Cement Industry: A proactive growth partner of the Indian Railways

This increasing collaborative dynamism in operations can be attributed to multiple factors including increased interface with CMA and the Member Companies, which has contributed to a better understanding on both sides of requirements and constraints leading to operational and policy changes to support industry. Railways have taken progressive measures such as restructuring at the Railway Board, doubling speed of freight trains etc, which have enabled significant transformation and improved cement loading on railways. Such a transition to increased rail movement is not only energy efficient but also promotes environmental conservation as Railways is a more environment friendly mode for moving cement.3 It is important to note that the loading can be increased even further with sustained support from the Railway Board.

A win-win for both

This increasing cement loading on rail is a win-win both for the Indian Railways and the Cement Industry. Measures such as the launch of Freight Business Development Portal, setting up of Traffic Transportation and Business Research (TT&BR) Unit etc, taken by the Indian Railways have helped the Cement Industry increasingly find value in moving cement and clinker on rail. This is a welcome transition, which should continue going ahead. Being one of the eight core industries in India, the Cement Industry can contribute significantly towards such a transition.

The Indian Railways is currently working towards establishing around 500 multimodal cargo terminals under the PM Gati Shakti program over a period of next 4 to 5 years.5 The Master Circular on Gati Shakti Multimodal Cargo Terminal (GCT) has also been released by the Railway Board.6 To drive such a transition, it is important that appropriate operational and policy changes be urgently introduced so that the momentum is not lost. This would provide win-win solutions for all the stakeholders involved. Under such a scenario, regular stakeholder consultation become crucial to develop a holistic perception in the matter.

The Cement Industry actively looks forward to continue as a long term growth partner of the Indian Railways. As the Railways continue to move forward with necessary measures including creation of a robust multimodal infrastructure, it is important that a holistic perception is developed taking into consideration the views of all the stakeholders involved. Such a consultative approach will not only promote inclusive growth but also lead to economic development while encouraging the Cement Industry to consider apposite technology and innovative interventions 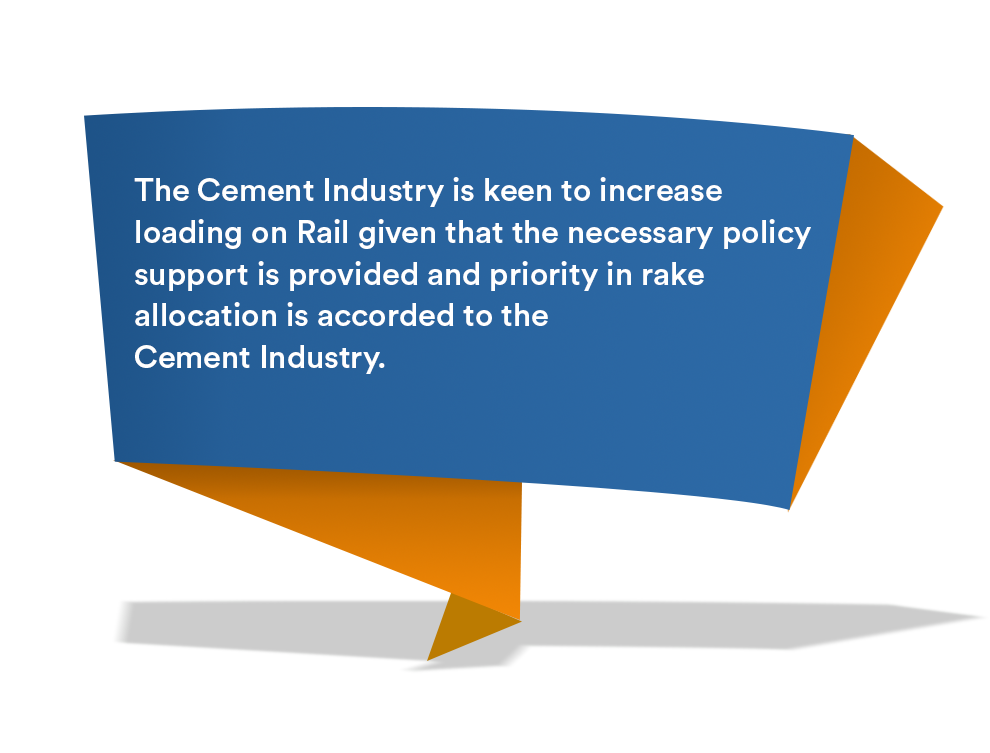