Efficient and seamless logistics management is vital for businesses to ensure timely and cost effective services. For the Cement Industry, logistics costs can go as high as 30-35%. Selection of an efficient delivery model is, therefore, important for Cement manufacturers, which may involve optimising technology, processes and methods.1

Cement is generally moved through all major modes, including road, rail and/or using waterways, depending upon connectivity between plant(s) and end use market. In 2020-21, roads represented ~71-72% share of the total cement transportation in India followed by rail (25%) and waterways (~3-4%).2 Road is generally preferred for short lead distances (up to 300 km) while rail and waterways are the preferred options for longer routes.3

Advantages of bulk movement of cement
Avoid loss due to seepage, multiple handling or deterioration of bags
Increased security as pilferage can be avoided during cement transit or at the construction site
Dust emissions at railway terminals, godowns and construction sites can be avoided
Shelf life of cement is increased compared to bagged movement
Gives ability to transport large volume with consistent quality
Can reduce the project implementation time and cost
Storage space requirements can be reduced at the consumer location
Can help improve competitiveness of rail vis a vis road as a large consignment size can be delivered
Would help in reducing turnaround time at ports
Executive summary – Findings & recommendations, https://niti.gov.in/planningcommission.gov.in/docs/aboutus/committee/wrkgrp11/wg11_Cement.pdf, NITI Aayog, accessed November 24, 2020

Despite some advantages associated with bulk movement, its smaller share in overall logistics can be attributed to the following factors:7

The Indian logistics industry is going through a transition. As the number of companies engaged in logistics increase and the volumes moved show a constant growth, there is a higher need felt for driving operational efficiencies across the supply chain. The Indian logistics market is currently valued at USD 215 billion and is growing at a Compounded Annual Growth Rate of 10.5%.12 Under such a scenario of rapid growth, the needs of the market are constantly evolving and it is important that a combination of modal movements are progressively considered. Considering the benefits offered by bulk, it is important that creation of necessary infrastructure and a guiding policy framework be expedited. A CMA Member Company has moved cement on bulk containers on a trial basis. Key leanings have emerged from the trial which could provide cues for promoting bulk movement going ahead.

Government thinking is also suggestive of a transition towards bulk logistics. The Logistics Wing, Ministry of Commerce, is considering creation of bulk terminals at 8-10 large institutional demand centers under the National Logistics Policy. The Prime Minister of India recently launched the Gati Shakti scheme, which is a National Master Plan for driving multimodal connectivity across the Country. It will bring together 16 Ministries including Railways and Roadways, for integrated planning and coordinated implementation of infrastructure connectivity projects. The Mumbai Port Trust has taken a lead under the scheme and has invited Expression of Interest for erection of temporary silos for bulk commodities such as cement and fly ash on Mumbai Port Trust land by private parties.13 Creation of bulk storage has also been included as an indicator under the recently released Logistics Ease Across Different States (LEADS) 2021 report by the Ministry of Commerce, Government of India.14 These announcements indicate the intent to transit to bulk movement moving forward. For creating of such large infrastructure, it is important that a holistic perception is evolved and regular stakeholder consultations are held.

Considering the developments in the market and the thought process underway for a transition towards bulk movement, it is important to study and assess the infrastructure progress required for such a change. A holistic perception needs to be developed taking into consideration the views of all the stakeholders involved. Under such a scenario, stakeholder consultation becomes necessary to ensure that the policy and the market keep pace for optimal success on ground. 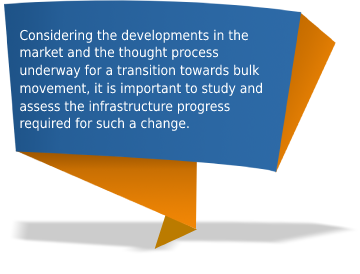