The global community is increasingly acknowledging the role of anthropogenic activities in global warming. During the Paris Agreement (2015) and Glasgow Climate Change Conference(2021), multiple world leaders committed to limiting global temperature rise to well below 2°C above pre-industrial levels and pursuing efforts to limit warming to 1.5°C. India’s commitment to achieving net zero emissions by 2070 is akin to climate leadership, considering that India has not been a historical contributor to greenhouse gas emissions. Between 1870 to 2019, it has contributed only about 4% of the global total emissions1

Setting up vision (or long term target) of a low carbon economy is the first step to realising a sustainable future. The Indian Cement Companies have been a forerunner in adopting the sustainability paradigm and has adopted commensurate measures to adapt and mitigate the adverse impacts of climate change. While multiple Cement Companies have laid down decarbonisation roadmap and targets, six companies have adopted the Science Based Target Initiative (SBTi) framework. The SBTi is a partnership between CDP, the United Nations Global Compact, World Resources Institute (WRI) and the World Wide Fund for Nature (WWF). Targets adopted by a company to reduce GHG emissions are considered science based if they are in line to meet the goals of the Paris Agreement (to limit global warming to well below 2°C above pre-industrial levels and pursue efforts to limit warming to 1.5°C). Science based targets have lately emerged as the de facto standards for Companies assessing the how much and how quick modalities of their low carbon transition.

Table details the GHG emission reduction target and corresponding timeline adopted by some of the Indian Cement Companies representing about 48% of the total cement installed capacity.2These Cement Companies are required to disclose their emissions annually and monitor progress on reaching the voluntarily adopted target. Some of the recommended mediums of disclosure include CDP, annual reports, sustainability reports and company’s website.

The Cement Industry has been making consistent efforts towards resource and energy efficient operations. The Government can play a catalysing role in streamlining the low carbon transition through an enabling policy environment, financial aid towards futuristic R&D projects, subsidy on import of capital intensive technology and recategorisation of clean energy sources such as Waste Heat Recovery System (WHRS) as a renewable energy source. 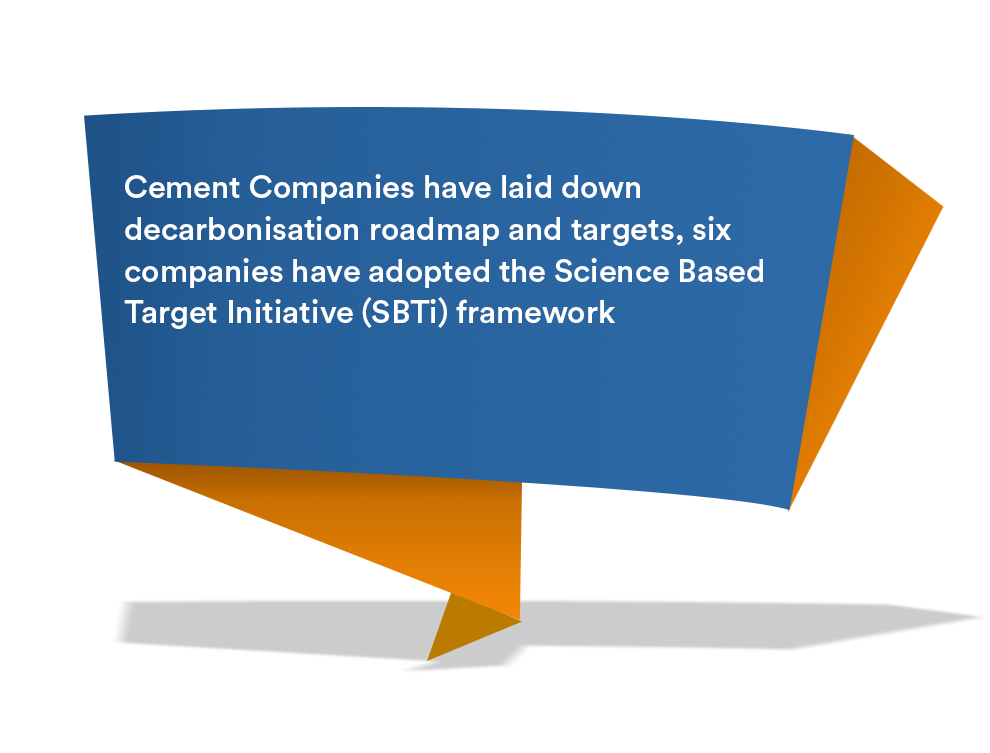