India, the fifth largest economy in the world, aims to achieve USD 5 trillion GDP mark by 2025. Concurrently, India is amongst the few G20 countries to be on track to meet its Nationally Determined Contributions (NDCs) committed under the Paris Agreement. These twin goals necessitate an immediate need to decouple economic growth from associated GHG emissions. About 50% of the total energy consumed by the industry sector is wasted in the form of heat losses requiring an urgent impetus on energy productivity.1 In the context, Waste Heat Recovery (WHR) system, a process of capturing waste heat losses during an industrial process, has a critical role to play in energy intensive industries such as Cement, Steel and Aluminium, among others. The captured waste heat losses can be utilised towards generation of power and other productive use through ancillary equipment(s).

According to the Ministry of New and Renewable Energy (MNRE), the Indian Cement Industry has the highest potential (amongst identified sectors) to generate 1100 MW (2016 estimates) of clean energy through the installation of WHRS.2 This capability continues to grow proportionately with an increase in cement manufacturing capacity, bringing it close to 1.3 GW at current production capacity levels. At full potential, WHRS would help replace the energy requirement equivalent to 8.6 million tonnes of coal, resulting in emissions savings of 12.8 million tonnes of CO2 (MtCO2 ) by the Indian Cement Industry.

In a Cement plant, limestone (CaCO3) is mixed with various additives and processed in the kiln at ~1400°C temperature to manufacture the intermediate product called clinker. Post clinker production, waste heat from various centres, such as the preheater and cooler, is recirculated for secondary and tertiary use in the kiln process and drying of input feed, mainly coal and limestone. After tertiary use, the temperature of waste gases is in the range of 250-400 degrees celsius. It is estimated that for dry process Cement plants, nearly 40% of the total input heat is available as waste heat from exit gases of the preheater and cooler.3

In the absence of a WHRS installation, the extraneous gases are vented out into the atmosphere as waste, which raises the local ambient temperature. In cement plants enabled with a WHRS, however, the waste heat from hot gases is leveraged to generate steam through the boiler, which is then passed through a turbine to generate electricity. WHRS is implemented after the pre-heater boiler and in the cooler mid section to recover heat from the exhaust gases. After heat extraction, the exhaust gases at ~90 degrees celsius are released into the atmosphere. The power generated from WHRS can meet up to 25-30% of the electrical power requirement in a Cement plant. Technologically, WHRS is the only solution that is economically feasible to tap this heat from industrial waste gases and to limit further usage of fossil fuels.

In addition to power production, WHRS offers several additional accompanying benefits in comparison to other clean energy/renewable energy alternatives, which are detailed below:

Currently, the Cement Industry has implemented 538 MW of WHRS capacity, which is the highest among all the potential sectors identified by MNRE.4 The adoption of WHRS is concentrated in three states, namely, Rajasthan (~42%), Chhattisgarh (~16%), and Madhya Pradesh (~11%), which together account for 70% of the total WHRS capacity in the Cement Sector. The high rate of adoption of WHRS in these States is largely on account of supporting policies that place WHRS power at par with renewable energy and various incentives such as allowing WHRS power to meet the Renewable Purchase Obligation (RPO) compliance for the obligated entity for both solar and non-solar categories. Respective RPO modalities across a few states with prominent presence of Cement Companies is detailed in Table . The cost of power through a WHRS, including capital cost, is as high as INR 4.5-5.0 per kWh, which can be made more scalable and comparable to traditional modes through an enabling policy support system.

WHRS in other economies

The United States (US), European Union (EU) and China, - accounting for over 50% of the global GHG emissions – have been promoting innovative policy measures and advanced technologies like WHRS in a bid to minimise their carbon footprint. In these economies, WHRS based power is considered equivalent to renewable energy.

WHRS as a process has significant potential to improve energy efficiency, mitigate greenhouse gas emissions and replace the additional requirement of conventional fuels without any logistical, environmental or process constraints. Given the advantages that WHRS represents for industry and the environment, India should consider recognising WHRS at par with renewable energy and provision for extending associated support to industry by way of relaxations in RPO compliance, electricity duty and import duties among others. 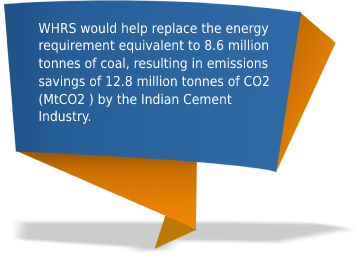