About 14 billion m3 of concrete is consumed every year, making it the most consumed man made material on the Earth. Its durability and versatility make it non replaceable and critical to the sustenance of human civilisation. Perhaps, one of the most fascinating facts about a cement concrete structure, unknown to many, is that it absorbs carbon dioxide (CO2) from air, similar to a plant, over its lifetime. It is estimated that around 75-100% of the carbon dioxide emitted during calcination of limestone will eventually be reabsorbed by the process called recarbonation1.2 In another estimate, the uptake of CO2 in cement infrastructure offsets about one half of the process emissions from cement production. This reabsorption of CO2, however, takes a significant time proportionate to the life of the cement concrete structure.

Table highlights the chemical reactions during the production and use of cement. The calcination process naturally reverses after the formation of concrete. The rate of recarbonation depends upon multiple factors, including the strength and porosity of the concrete and surface area exposed to air. It is estimated that concrete recarbonation advances at a rate of 1-5 mm per year, depending on the concrete’s porosity and permeability.4Reinforced concrete structures are designed to recarbonate extremely slowly (to avoid any corrosion of the steel reinforcement). Non reinforced products or thin/porous applications experience a relatively faster rate of recarbonation. At the end of its life, when a cement concrete structure is demolished its surface area is vastly increased and recarbonation occurs at a much faster rate

Chemical Reaction during (a) Production and (b) Use of Cement 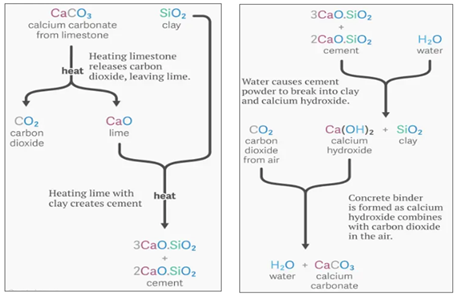 To realise maximum potential of CO2 reabsorption at the end of its life cycle, crushed concrete should be spread over instead of storage in large stockpiles. Exposure to ambient environment over time would ensure adequate air circulation leading to optimal recarbonation. Unlike plants, which release CO2 when it is decayed/burned, recarbonation of CO2 through mineralisation of crushed concrete is permanent. Another measure to accelerate the recarbonation of crushed demolition concrete is to circulate CO2 over the concrete, which will also create improved recycled aggregates.

The latest IPCC report published ahead of COP26 climate change conference at Glasgow highlights that the cement recarbonation carbon sink absorbs an estimated 200 million tonnes of CO2 every year.5 Leading institutions around the world today have recognised recarbonation as a potential lever to achieve low carbon transition across the cement industry. 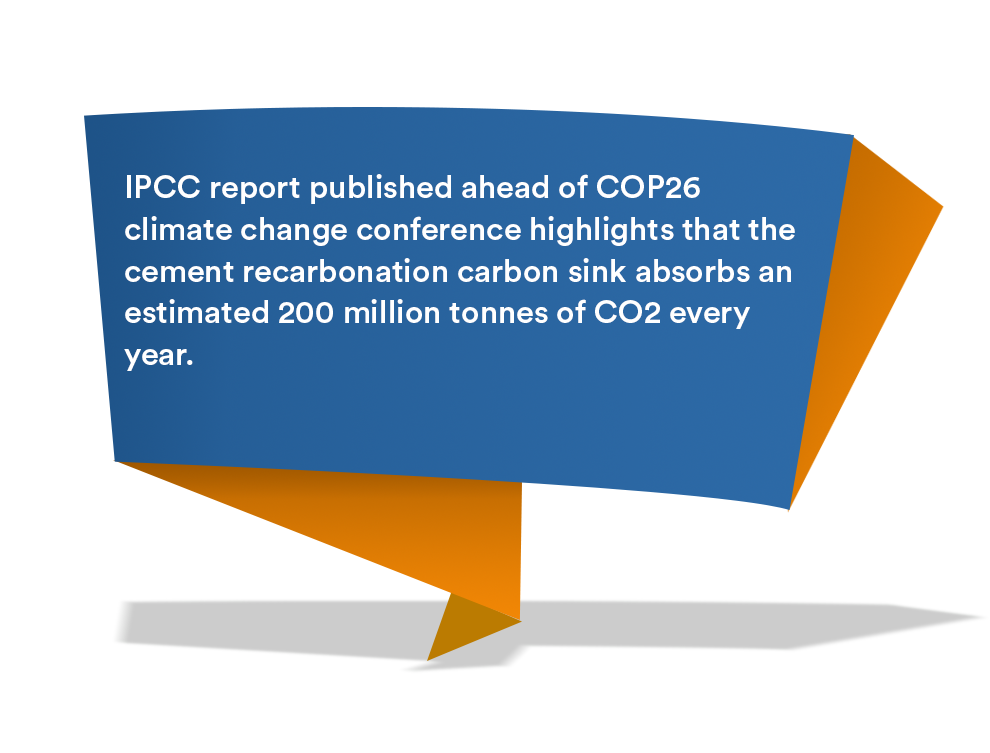