Rising global temperature, altered rainfall patterns and other extreme climate events in the form of heatwaves, drought and storms – all are manifestations of the rapidly evolving global climate, which significantly impacts businesses and civil society at large. A strong and increasing scientific consensus on the adversities of climate change has prompted the business community to assimilate climate risks in the mainstream planning, realign goals, focus on alternatives and strengthen the broad base mitigation and adaptation interventions. The Indian Cement Industry has been a frontrunner when it comes to energy and resource efficient operations. Implementation of new technology and the use of alternative fuels/resources has considerably reduced the sector’s overall carbon footprints.

The Indian Cement Industry is perhaps the only sector having its own Low Carbon Technology Roadmap (LCTR) spearheaded by some of the large players thereby setting up an ambitious target to reduce its direct carbon emissions by 45% by 2050 with respect to 2010 levels. Research estimates suggest that over 80% of the CO2 emission reduction till 2050 would be achieved through technological innovation and new growth horizons.1

CDP (formerly known as Carbon Disclosure Project) assessed 13 largest publicly listed Cement Companies (excluding China) worldwide for their business readiness towards a low carbon economy transition ( Figure ). These companies represent 15% of the global cement production capacity. These Cement Companies were assessed on their approach to leverage opportunities and mitigate physical and transitional risks associated with climate change. The Indian counterparts were identified to be resilient and at a lower risk to climate change than many of their European, Asian and Latin American counterparts. Figure illustrates risk versus opportunity matrix for the identified companies. Bubble size represents stronger performance on climate governance and strategy. 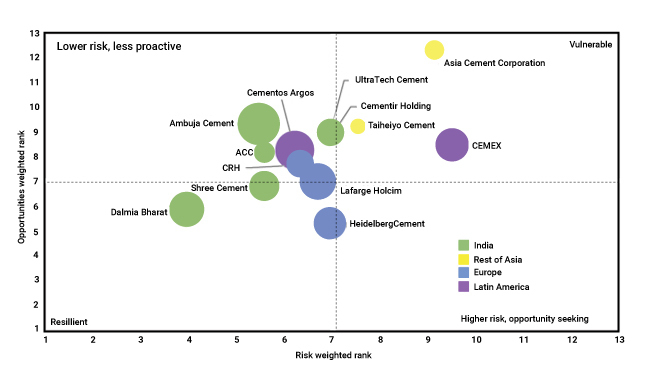 Multiple Indian Cement players have been proactively taking up measures that resonate with the leaders across sectors towards addressing the challenges and risks associated with climate change. For instance, UltraTech Limited has committed to the Energy Productivity (EP100) initiative under which it aims to double its energy productivity by 2035 from 2010 levels;2 Dalmia Bharat Limited has set a goal to power all its operations with 100% renewable electricity by 2030;3 ACC Limited and Ambuja Cements Limited set up Geocycle to streamline availability of waste for utilisation as an alternative fuel and plans increase Thermal Substitution Rate (TSR) over 20% by 2025;4 HeidelbergCement Limited has committed to producing only blended cement;5 Shree Cement Limited and JK Cement Limited have committed to science based targets.6 Such voluntary measures speak volumes of the commitment of the Indian Cement Industry towards playing a critical role in India’s low carbon economy transition. 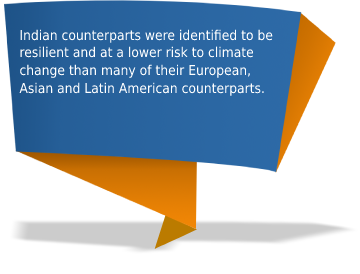